Just yesterday, the Philippines House of Representatives approved House Bill No. 78, a measure amending the 84-year-old Public Service Act to allow full foreign ownership in the public service sector including the transportation, communication and power industries according to reports from the Philippine Star.  The provision in the 1987 Philippine Constitution, which caps foreign ownership at 40 percent and reserves 60 percent for Filipinos, is meant to protect the rights of Filipino citizens to more affordable services which should be dictated by the majority Filipino ownership. 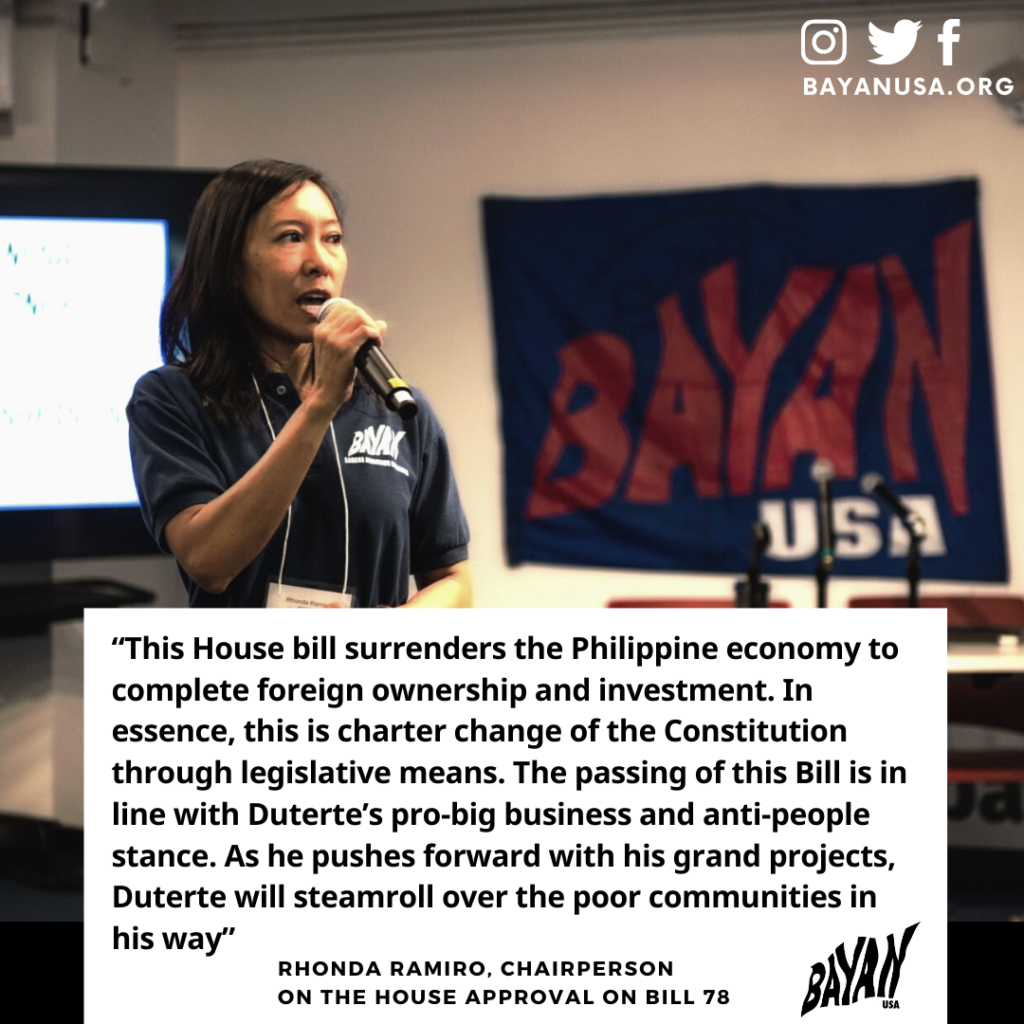 “This House bill surrenders the Philippine economy to complete foreign ownership and investment. In essence, this is charter change of the Constitution through legislative means. Having foreign ownership of key utilities can and has already resulted in major disasters because they only prioritize profits and do not care about public service obligations and the well being of the Filipino people.” stated Rhonda Ramiro, Chairperson of BAYAN USA, referencing the plunder and destruction caused by 100% foreign ownership of mining projects under the Mining Act of 1995, “If implemented, this attack on Philippine sovereignty will exemplify the worst of what the neoliberal economic agenda imposes on the world’s poorest nations.”

Duterte’s economic plan of “Build Build Build” already includes foreign business investments in his costly infrastructure projects and has received large amounts of foreign loans especially from China, reaching $924 million U.S. dollars.  Many of these projects disregard the communities in the pathways of the airports, railways and dams constructed under Build Build Build and will ultimately displace them. The recent water shortage in Manila was due to the major Kaliwa Dam project which is part of the Philippines’ involvement in China’s Belt and Road Initiative (BRI). This project would uproot more than 20,000 indigenious peoples from their ancestral land.

“The passing of this Bill is in line with Duterte’s pro-big business and anti-people stance. As he pushes forward with his grand projects, Duterte will steamroll over the poor communities in his way,” continued Ramiro. “This is a move against the people’s demands for national industrialization that places more importance on the country’s needs for jobs and affordable finished goods for the people and not for profit.  The Philippines has a wealth of natural resources, which should never be handed over on a silver platter to foreign ownership when it should benefit the country and its people. The Filipino people will fight this underhanded maneuver by Duterte and his loyalists in Congress.”