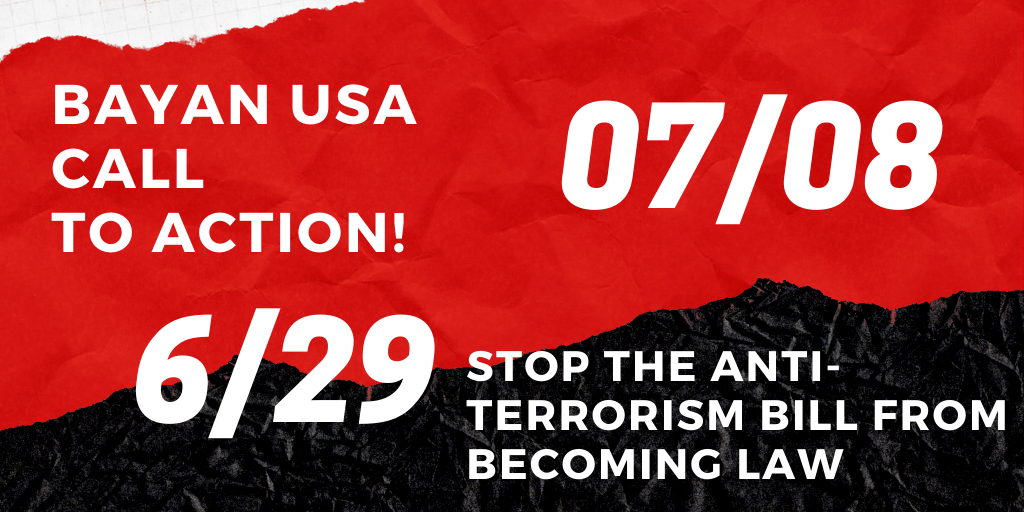 BAYAN USA is joining global days of action against the Anti-Terrorism Law to show international outrage and opposition to this law recently signed by President Duterte in the Philippines, which would result in increased repression against all Filipinos including overseas Filipinos. The Anti-Terrorism Law is dangerous not only for activists but for all those who criticize the Duterte regime and will legalize mass arrests of anyone in opposition to Duterte by tagging them as a terrorist.

JOIN BAYAN USA and other organizations in actions near you, or plan an action in your area (Stay tuned…more information will be updated):

In the Philippines, the leadership and committee of the Lower House railroaded the approval of the new and brutal anti-terrorism bill, which was initially passed by the Senate. Without a doubt, this move was dictated by the US-Duterte regime. We can expect Duterte to sign the bill into law in the following days, unless the mass movement is able to force him to backtrack on its passage. Another possibility is for Duterte to wait 30 days (July 9) without taking action, after which the bill would automatically become law.

Stronger draconian powers, even worse than martial law and blatantly in violation of the Constitution, were given to the military, police and the government. These will be used to suppress and intimidate not only activists and critics but also against the people. Anyone can be targeted by the regime and be victimized by the abuses of the police and military. State Terrorism is the essence of the “Anti-terrorism law”.

What would the Anti-Terror law do?

The new “anti-terrorism law” must be exposed and opposed as a law establishing state terrorism. The “anti-terror law” gives the state oppressive and excessive powers to suppress any form of dissent, to violate people’s civil rights, and to spread fear among the people. These powers even exceed that of martial law, which still has limitations under the Constitution.

The definition of “terrorism” in the “anti-terror law” is very vague and excessively broad. It also grants repressive powers to the government. This will certainly be abused by Duterte, the fascistic dictator, the Armed Forces of the Philippines (AFP), Philippine National Police (PNP) and the whole government. Similar to how the Bayanihan Act was abused to arrest ordinary people , it can be expected that the same will be done through the “Anti-Terror Law.” Anyone can be a victim.

The definition of terrorism covers a wide range of common crimes such as murder, destruction of facilities and infrastructure, bearing of arms, hijacking, kidnapping, and other crimes punishable under the penal code.

The above mentioned common crimes can be easily transformed into acts of terrorism. The authorities only need to link the acts on any of the ​very broad list of objectives/goals​ – to intimidate the public, to spread messages of fear, to threaten the government, to destroy and destabilize the economy, political and social structure, to create public emergency and to undermine public safety. The penalty would be life imprisonment without parole.

It gives powers to the anti-terrorism council, the military and the police to conduct surveillance, wiretap, access of databases, examine bank records and freeze of assets of organizations and individuals, even on mere suspicion of having connections to or funding terrorists.

The courts are given the power to immediately issue, within 72 hours, a 6-month preliminary ex parte to groups or individuals that are accused by the anti-terrorism council to be terrorists or those affiliated with terrorists. Ex parte means without notification and hearing on the side of the accused.

The most vicious feature is that it allows for arrest without any court order and imprisonment of 14 days, which can be extended for 10 additional days for anyone suspected of being a terrorist or having any connections with terrorists. This goes beyond and blatantly violates the Constitution which states that anyone accused of committing serious crimes may only be detained for a maximum of 72 hours or 3 days.

Section 49 of the bill also covers Filipino nationals “who commit any of the acts…outside the territorial jurisdiction of the Philippines”.